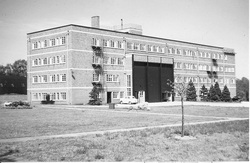 The ex-Admiralty building soon after it became the home of NIO
The origins - Why Wormley?

In the darkest days of WWII a group of far-sighted individuals planned the establishment of a multi-disciplinary research institute.  It would be formed from two existing groups.  The scientists of the Discovery Investigations had studied the ecology of whales and related ocean biology and physical oceanography in the Southern Ocean.  Group W of the Admiralty Research Laboratory at Teddington were learning about surface waves with a view to improving the prediction of wave conditions for amphibious landings. 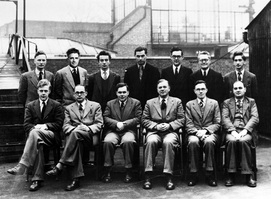 The new group, the National Institute of Oceanography, came into being on April 1st 1949 and gained its Royal Charter on 9 October 1950.  Its Director was Dr George Deacon, FRS a chemist who had worked on the Discovery Investigations and had been leader of Group W.

The selection of a new permanent home for the NIO considered a number of locations: alongside the Marine Biological Association in Plymouth, in Liverpool at the Tidal Institute, at Hythe on Southampton Water and a redundant Admiralty building in the grounds of King Edward’s School, Witley that from September 1941 had housed part of the Admiralty Signals Establishment (ASE).  It was this latter site in Wormley, Surrey that was selected.   It had the advantage of already being a research laboratory and was close to Witley Station on the Portsmouth to Waterloo railway line.

The NIO scientists started to occupy site in Surrey in early 1953.  They were employees of the Royal Naval Scientific Service (RNSS) and were given the responsibility of running, and programming of the Royal Research Ships Discovery II and William Scoresby (the latter up to 1953).  At Deacon’s insistence, the NIO was to be multi-disciplinary covering physical, chemical and biological oceanography as well as geology and geophysics.
The staff list at the time of the move to Wormley (March 1953) and views of the laboratories
Numerous organisational changes occurred following the transfer of NIO from the RNSS to the Natural Environment Research Council (NERC) in 1966.  These were associated with changes in government policy and fluctuations in funding.   In the 1980s there was a major change following the 1971 publication of the Rothschild report on research funding.  The Institute (now the Institute of Oceanographic Sciences) secured a major contract for research into the feasibility of the disposal of high level radioactive waste in the deep ocean.  The staff increase associated with this led to the purchase and occupation of a former poor law institution at Hambledon.  The Institute also secured a contract from the US Geological Survey to survey the 13million km2 US Exclusive Economic Zone using the Institute’s GLORIA towed side scan sonar (1984-1991).
Funding was approved by 1990.  As a precursor to the move a group of physical oceanographers (the James Rennell Centre for Ocean Circulation) was established in the Chilworth Science Park Southampton as the focus of the UK contribution the the World Ocean Circulation Experiment.
The Wormley site was subsequently sold for residential development and the buildings were demolished.
Major organisational events timeline
1949     NIO founded Apr 1st.  Dr George Deacon FRS appointed Director.
1953     Staff move into Wormley building in February.
1962     New RRS Discovery commissioned.
1963     Whale Research Unit moves to Natural History Museum
1963-4  International Indian Ocean Expedition
1965     Natural Environment Research Council created and becomes NIO's governing body
1966     New block of building opens
1971     Deacon retires as Director, succeeded by Henry Charnock
1973     NIO absorbed into the Institute of Oceanographic Sciences on June 1st
with Institute of Coastal Oceanography and Tides- Bidston and the Unit of Coastal Sedimentation -
Taunton.
1978     Henry Charnock resigns as Director and moves to University of Southampton succeeded by Tony Laughton.
1979     Research on radioactive waste disposal starts
1982     Visit by Duke of Edinburgh May 20
1985     UCS Taunton closes, some staff relocate to Wormley and Bidston.
1987     IOS Wormley and Bidston labs separate.  Wormley lab becomes IOS Deacon Laboratory.
1988      Laughton retires as Director – succeeded by Colin Summerhayes.
1990      Offshoot of Marine Physics group established in Southampton as James Rennell Centre.
1991-2   RRS Discovery major refit – lengthened, operational endurance and science party size increased.
1995     Wormley lab closes Sept 23rd – staff transfer to the Southampton Oceanography Centre or take early
retirement.